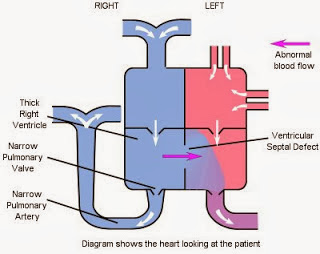 Tetralogy of Fallot classified as a cyanotic heart defect because of the tetralogy falot inadequate oxygenation of blood pumped to the body.

At birth, the baby did not show signs of cyanosis, but later may develop into a scary episode, the skin suddenly turned blue after crying or after feeding. The ventricular septal defect to the left ventricle.

In tetralogy of Fallot amount of blood to the lungs is less because of obstruction due to pulmonary stenosis and pulmonary artery sizes smaller. This causes a reduction in blood flow through the pulmonary valve. Blood oxygen deficient, partly flows into the left ventricle, to the aorta and then forwarded to the entire body.

Shunting of oxygen-poor blood from the right ventricle to the body causes a decrease in arterial oxygen saturation, so that the baby looks cyanosis or blue. Cyanosis occurs because oxygen-poor blood appear darker and blue, causing the lips and the skin looks blue. If the sudden decrease in the amount of blood to the lungs in some babies and children have cyanotic spells or also called paroxysmal hypolemic spell, paroxymal dyspnoe, infant or child becomes very blue, breathing quickly. 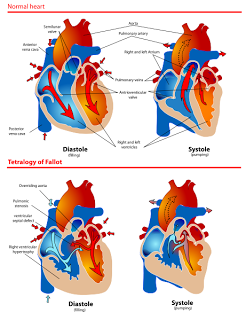 Actually, hemodynamics, which plays a role VSD and pulmonary stenosis. From the second most important thing is pulmonary stenosis. For example VSD was combined with mild stenosis, right ventricular pressure will still be lower than the pressure of the left ventricle shunt will run from left to right.

So in fact the clinical symptoms are very dependent on the degree of stenosis, also on the size of the defect bulkhead. When the valve is very narrow (severe stenosis) will be very blue baby at birth and require immediate surgery. If the child mild stenosis child can grow over 1 year – 2 years without requiring any. Most of the infants were between 2 variations which become blue with light activities such as eating or crying.