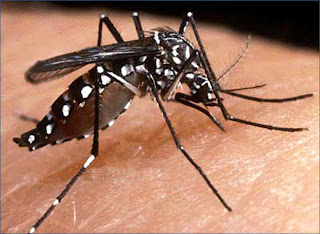 This disease was first recorded in the year 1779-1780 is endemic in Asia, Africa and North America and occurs almost simultaneously with the level of morbidity and mortality are high. This illustrates that the spread of this disease is very extensive since more than 200 years ago and is a disease that is quite dangerous. When even this disease is still a serious problem in the health sector generally in tropical and subtropical areas with economic and health levels are low.

Dengue fever (DF) is a disease caused by the dengue virus, family Flaviviridae, the genus is a flavivirus. The disease is not transmitted directly from human to human, but through the intercession through mosquito bites. The species of mosquito that is the vector of the disease is the main intermediary Aedes aegypti and Aedes albopictus females.

DF is the mildest form of the following form is Dengue Hemorrhagic Fever (DHF) and Dengue Shock Syndrome (DSS).

Dengue fever has signs and symptoms in the form of heat which lasts between 4-7 days after the bite of a mosquito carrying the virus is accompanied by the following symptoms which include:

While Dengue Haemorrhagic Fever has the following signs and symptoms:
Symptoms of the above plus:

The most severe form of the viral infection is dengue shock syndrome (DSS) in which symptoms include:
Symptoms in DHF plus,

For ease in determining the diagnosis and prevent overdiagnosis, the WHO, divide into 4 degrees of clinical manifestations, namely:

In principle, because this is a disease due to a virus infection then there is no specific medicine to address them . Care provided only a symptomatic treatment is only a general state of repair of sufferers and to guard against dehydration ( lack of fluids ) . The treatment can be done at home if the patient is still able to eat and drink alone and no nausea or vomiting is severe ( DHF Grade I – II ) . Treatment can be done by providing a warm compress , heat the medicine go down , a pain reliever and Antiemetic if necessary .

If the condition of the patient does not improve or if there are signs of shock ( DHF Grade III – IV ) immediately brought to the nearest health facility .

DHF will generally experience healing after 7-8 days , if there is no secondary infection and the body’s basic defense is a good sufferer . Signs of healing among others, include fever down slowly , and drink appetite improved , fatigue is reduced and the body feels fresh again .