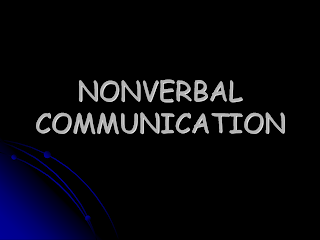 Non-verbal communication is the transfer of a message without using words. Is the surest way to convey the message to others. Nurses need to be aware of the message verbally and non-verbally conveyed clients ranging from the current study to evaluate nursing care, because the non-verbal cues to add meaning to the verbal message. The nurse who detects a condition and determine the need for nursing care.

Non-verbal communication is observed on:

Communication does not only depend on the messages but also on the relationship between the speaker and the listener. Meta-communication is a comment on the content of the conversation and the nature of the relationship between the speaking, which is a message in the message that conveys the attitude and feelings of the sender to the listener.
Example: smile when angry.

Appearance of people, is one of the first things noticed during interpersonal communication. The first impression arising under 20 seconds to 4 minutes. Eighty-four percent of the impression of someone based on appearance (Lalli Ascosi, 1990 in Potter and Perry, 1993).

Physical shape, how to dress and adorn show personality, social status, occupation, religion, culture and self-concept. Nurses are concerned about the appearance of self can lead to professional self-image and positive. The physical appearance of nurses affect the client’s perception of the care / nursing care received, because each client has the image of a nurse how you should look. Although the appearance was not fully reflect the ability of the nurse, but may be more difficult for nurses to foster a sense of trust to the client if the nurse does not meet the client’s image.

Speaker’s tone has a large effect on the meaning of the message that is sent, because a person’s emotions can directly affect the tone of his voice. Nurses should be aware of their emotions while interacting with clients, because the intention to equate genuine sense of interest to the client can be blocked by the nurse’s tone.

Results of a study showed six main emotional state through facial expressions looks: shocked, afraid, angry, disgusted, happy and sad. Facial expressions are often used as an important basis in determining interpesonal opinion. Eye contact is very important in interpersonal communication. People who maintain eye contact during conversation expressed as a trustworthy person, and allow it to be a good observer. Nurses should not look down when talking to clients, therefore when talking should sit so that nurses do not seem dominant if eye contact with the client is done in a parallel state.

Posture and steps describe the attitudes, emotions, self-concept and physical state. Nurses can gather useful information by observing posture and move the client. Steps can be influenced by physical factors such as pain, medication, or fracture.

Affection, emotional support, and concern conveyed through touch. Touch is an important part of the nurse-client relationship, but must pay attention to social norms. When providing nursing care, the nurse touches the client, such as bathing, physical examination, or help to dress. Be aware that illness is to make the client dependent on nurses to make contact so it is difficult to avoid interpersonal touch. Bradley & Edinburgh (1982) and Wilson & Kneisl (1992) states that although many useful touch when assisting clients, but to consider whether the use of touch can be understood and accepted by the client, so it should be done with sensitivity and caution.