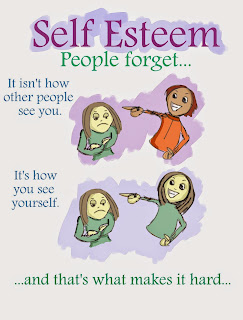 Low Self – Esteem is feeling negative about themselves, including loss of self-confidence, worthless, useless, helpless, pessimistic there is no hope and despair.

Predisposition factor
Factors predisposing to chronic low self-esteem is the refusal of parents who are not reality, repeated failures, have less personal responsibility, dependence on others, the ideal self is not realistic.

Precipitation factors
Factors precipitation occurrence of chronic low self-esteem is the loss of some members of the body, appearance or body shape, have failed, and declining productivity.
Disorders of self-concept : chronic low self esteem can occur situational or chronic.

a. Situational
Disorders of self-concept : chronic low self esteem can occur situationally caused by trauma that appear suddenly, for example, have surgery, an accident, a victim of rape or becoming prisoners and should go to jail. In addition , hospitalized also can cause the lace on the person’s self esteem because of physical illness , installation tool that makes the client uncomfortable, expectations were not achieved will be the structure, shape and function of the body, and treatment of health workers who lack respect the client and family.

b. Chronic
Disorders of self-concept : chronic low self esteem usually been going on since long before the pain felt by the client or before treated . The client already had before being treated and negative thoughts become more frequent while being treated.

Both predisposing factors and precipitation above, if someone has a good influence in thinking , being and acting , it is considered to have influenced the individual coping so menjdai ineffective (ineffective coping mechanisms). If the condition of the client is left without any further intervention can lead to a condition where the client does not have the will to get along with others (social isolation). Clients who experience social isolation can make cool clients with the world and his own mind that the risk of violent behavior can emerge.